Rakuten a Global Company-cashback affiliate review will be the topic of today. I will give information about Rakuten to give those interested a better idea of who is Rakuten? What is their program like? Do they offer an affiliate program that I as an affiliate marketer can make money. 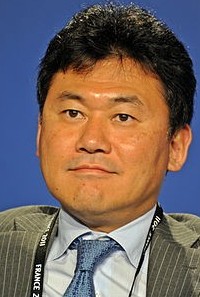 Some History that will give you a better understanding as it certainly did me. There used to be an affiliate marketing company called Linkshare which was acquired by Rakuten in 205. Linkshare at that time was considered the largest affiliate marketer on line. Linkshare had been founded in 1996 by Heidi Messner. Heidi and her brother Stephen had discovered they could create a more valuable use of the internet if they would monetize its traffic through use of performance-based links. It worked so well they sold the Linkshare to Rakuten in 2006 for the amount of $425,000,000 ……. Not bad for starting out of your garage.

Rakuten now had access to all these links and the companies that were affiliated with Linkshare, Linkshare you might say is the ancestor to all affiliate marketing today as it is the model most widely adopted throughout the industry.

How Does Rakuten Work?

Rakuten is a cash rebate company. They issue cashback reward for their {Rakuten} customers to receive a cashback % based on what items from the vendors that partner with them [Rakuten] qualify. The vendors are willing to pay Rakuten a dollar amount to have access to the huge customer base that Rakuten offers. In turn Rakuten splits that money with their customers.

You start by opening an account with Rakuten. Once, you have an account you log into using the members’ area log in. Then it’s a matter of finding the stores you wish to shop at. Find the store,say it’s Kohl s, you find them by scrolling through an alphabetized list. Click on the Kohl s link provided and you’ll be taken directly to Kohl’s website. Then you shop as you normally would. The difference is because you are using Rakutens portal to reach Kohl s website anything you buy that is a qualified item you share with Rakenten as they will pay you. You are like me your going to shop anyway might as well get paid for doing it.

Every store that is listed in front of you as you scroll through Rakutens site will show you the % they are offering om qualified items anywhere from 1% as high as 30 to 40% will be paid back to you as long as you access their website through the Rakuten portal………. 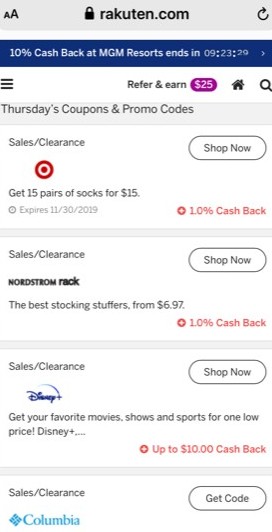 As an example in specials offered as a deal for the day we have Disney offering Up to $10.00 cash back on certain movies……… Or you may find Amazon listed as it is and they show 2% cash back………. on regular items and 5% on clothing items it will vary by category within each dept. The % cash back may fluctuate with items from time to time based on the company may be running a special sale in that category this week or day. You may not get cash back on everything but I’M sure you’ll find it worth your while.

Why Does Rakuten Give Cash Back?

Vendors and retailers may not have access to the customer base that Rakuten has and not all companies can afford to just advertise. So they are willing to pay Rakuten to gain access to their client base. Who, already is shopping with them. So Rakuten has an asset {the clients} that the companies are willing to pay for. Rakuten is then willing to pay or share in that by giving up to half of the money as a cash reward. WIN! WIN!, so customers become members’ et cashback it’s a win for them so they in turn tell their friends …………… Rakuten sweetens that deal as well by offering a tells friend ……… by offering $10.00 to new customers if they spend $25.00 or more within the first 90 days.

Rakuten then also offers a $25.00 referral program bonus. Rakuten will pay the bonus for each referral. The customer accesses their own unique link that they use to share with friends or thorough social media. When someone is referred through that link and becomes a member and spends a minimum of $25.00 you qualify for the $25.00 bonus. 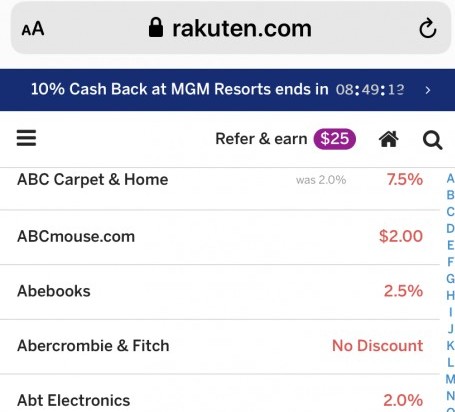 STORES a to z 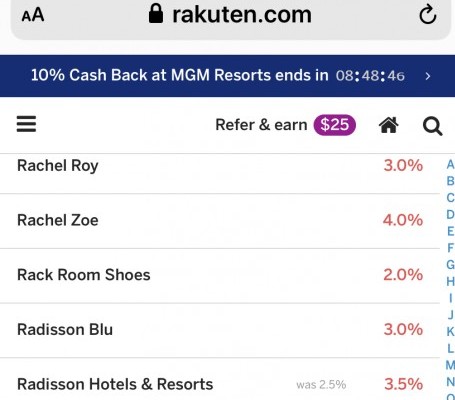 To think there is over 2500 stores for them to choose from..and to think of all the reasons someone has to shop ………ie Birthdays………Anniversaries………..Special Events………..AND of course Christmas……………..

>  Not all items qualify

I’m going to paraphrase the comments ……………..here are a few

I personally like this for everyone. As an affiliate marketer there seems to be plenty to be able to promote and make money. I will give Rakuten a 4.8 out of a possible 5 only because if your going to market as an affiliate only getting paid four times a year would be hard to get used to budgeting my household needs. Is Rakuten a good company?

Be sure to visit the Affiliate Marketers Here’s A Couple of Black Friday Specials.

Your thoughts and comments are welcome

Are you a business owner? Amazon offers a free business account for every type of business .Put Amazon’s solutions to work for you.